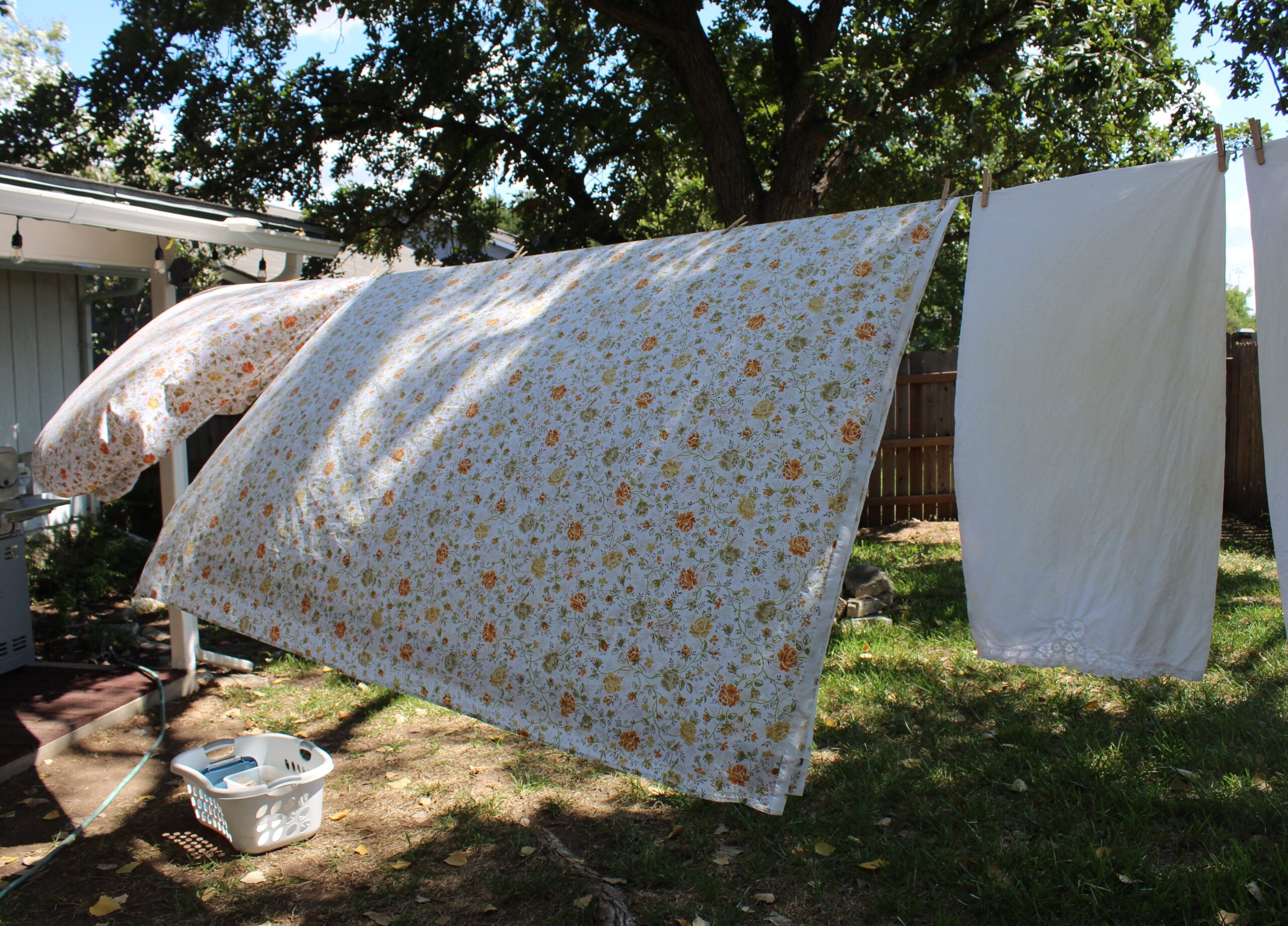 I thought that compiling some snippets around my household would be an interesting thing to do this week. I don’t think I’ve ever done a post like this before.

I’ve managed to keep our first garden in Texas alive but I wouldn’t call it a rousing success. I think my plants have used their energy just staying alive. We went almost two months without a drop of rain so I feel like my plants are nothing if not hardy! Since the rain in late August, my asparagus beans have literally blossomed with new life. My pepper plants are showing the first peppers since May, and my okra plants are really really outdoing themselves. Before I was getting one okra every fourth day and now my patch is giving me one every other day, which works out to three okras every week. It’s been an okra madhouse, I’m telling ya….I’ll have to put gumbo on the menu list. For next month, of course.

Harvest would be in full swing heading toward the wind-down if I were still living in Wisconsin. Here in Texas I’m learning that the end of summer can mean another planting season. Home improvement stores are selling bedding plants!? I’ve planted bush beans, zucchini, and swiss chard. This is all very backwards in my mind, but it means I may get to pick fresh green beans in October. Crazy. I’m thinking that if I can follow the planting charts and the weather is somewhat consistent, I could be harvesting some kind of fresh produce most of the year.

And check out the ONE flower that I successfully started from seed. It’s a Datura, or Moonflower. It blooms after dusk and has a phenomenal fragrance. And then it dies the next day.

It’s Fall in My Kitchen

The temperatures have dropped from the 100s to the 90s so you know what that means….it’s fall! Fall is my favorite season, so any twinge of change in the air is enough to trigger the start the season for me. So I burn my candles as the AC runs and drink hot tea in my bare feet.

One overcast day I cooked off the ham bone I’ve had in the freezer since spring and made a double batch of split pea soup to can. (The recipe came from here, with the addition of a handful of chopped bell pepper. The peppers make it taste like just like my favorite pea soup recipe from the More with Less cookbook.)

Eleven pints of soup sit in my pantry–fast food, ready in about 3 minutes. I usually can soup in quarts, but it was easier to use the accumulation of empty pint jars I had in the kitchen than to dig for empty quart jars in the back of a closet.

The local grocery store had a few flats of canned pumpkin marked down to 99 cents, then the next week they were down to 65 cents. I’ve never seen marked down food at that grocery store and sales are barely a thing so I bought a dozen cans. For some people that might be too much pumpkin. Today, halfway through September, I’ll be making my third batch of pumpkin muffins. Tis the season. If our skin starts taking on an orangish glow, you’ll know why.

As I do every week, I washed a few loads of laundry and hung them on my retractable clothesline. I haven’t seen a single other clothesline in the neighborhood, or in the city for that matter. It’s curious. For all the frenzied talk about protecting the earth’s resources, the number of people who don’t take advantage of the simplest form of solar energy is baffling…and maybe more talk than action? It’s especially efficient here in central Texas in the summer, where clothes usually dry in an hour or so.

My backyard with its simple open fence, backs up to a walking trail, so more than once I’ve noticed a curious look. One guy even took a picture. I wonder if my pajamas are now on his Instagram feed with a caption about the hillbillies that moved to neighborhood.

Every once in a while someone will stop and comment on how nice it is to see. One older lady stopped to talk last week. Seeing me hang out laundry took her back to her childhood and she can’t figure out why she ever stopped hanging laundry outside. She also said she was going to go right home and dig up some old patterns and make herself a cotton dress like the one I was wearing. Why she let herself drift away from wearing cool cotton clothes in the heat she couldn’t remember. She left all sorts of inspired. Anyway, it was nice to have a little chat over the backyard fence like the women in my grandma’s generation.

It had the funny result of inspiring me to finish some sewing of my own, a cotton “housedress” that I made last year. It needed some alterations in the shoulders and I set it aside but never went back to finish it. It’s on the “to-do” list for this week now.

Living in a big city has been an adventure and a stretching experience in every way. I’ve told many people that I feel like I’m living in a vacation home in the sweet little rental house I’ve generously named Cottonwood Manor. In spite of very much being in the heart of the city, it’s not all concrete and asphalt–this was the sunset in our neighborhood this week. But one of the reasons it seems like a vacation is that it’s always felt like a stop and not a destination.

We’ve taken steps to move to eastern Texas in a few months. As much as I’ve enjoyed it here, I will love being in a more rural environment that feels peaceful in a way that a city isn’t. Yay for new adventures, not so much for another move in our future. Sigh. But this move is more permanent and the idea of settling down is a very, very good one to me after two years of very unsettled circumstances.

So while I’m living here, I’m also planning and thinking about the future. This is our “real” first house, one that we chose and not one that’s been in the family or happened to be the only rental available. Last week, for the first time in my life, I walked through an aisle of kitchen sinks and weighed the pros and cons of each. If that isn’t serious commitment, I don’t know what is.