May I say a word to the wife whose husband prefers some place else besides home. See if you are the cause… 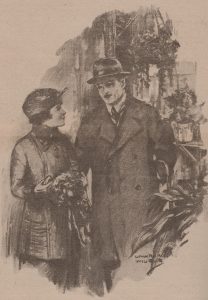 Nothing will send a man away quicker than a quarrelsome woman. Be kind to those around you and you will be thought more of; try to keep your clothes and the children’s clean and tidy, and he will be glad to come home finding you looking nice. When my better half is away for a day I try to have the house and myself and children look as if we were expecting some company, for after all, our own are company and we can depend on them for true friends if we treat them as we should. One rainy day he came home and I had everything slicked up and a white table cloth on table and vase of fresh flowers in the center. When he came in the room he said, “You have everything slicked up and nobody came.” I said “yes they did–you–and that was who I was looking for after evening work was over” and I passed around the little dainty lunch I had prepared. I couldn’t see that the rainy day had made him gloomy because he couldn’t work in the field. He was glad to be home, let us all do what we can to keep our family happy.

Very often in a family of several children, there is one who is not as quick to learn as his brothers and sisters. He is usually a very nervous and sensitive child and his feelings are often cruelly hurt by being taunted as being a “dummy” or in other cruel ways being reminded of this weakness, which he surely cannot help. 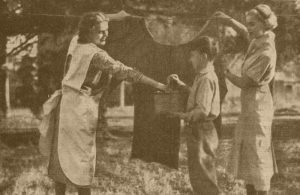 Dear mothers, if you have one of these among your little flock, be infinitely loving and patient, helping him all within your power by kind words and deeds, for your more fortunate children do not need you so badly as this little innocent. Some children who are slow to learn “booklore” are singularly gifted in other ways, and parents should earnestly endeavor to find out their other talents and help to develop them. One boy I know, was continually drawing pictures on his slate instead of “doing sums” and thereby drew down upon his head the severest rebukes from parents and teachers. Now he is an illustrator of note, for several of the largest magazines, drawing a very substantial salary. His talent for drawing which teachers and parents considered sheer nonsense years ago, is now his life’s work.

Another example: A girl, the oldest of five, never got beyond the fourth grade at school, being positively unable to keep up with her class-mates. As a child even, she had a singular gift for cooking and baking. In sheer despair her mother gave her a course in domestic science and now she holds a lucrative position as chef in a large hotel. If this child of yours possesses no especial gift, never taunt or allow others to taunt him upon his weakness for such treatment will only help to increase it. Many apparently “dull” children if properly treated with kindness and encouragement will, in time, grow more proficient. If his reports at school do not meet with your expectations do not allow him to see it, if you are convinced he is doing his best. Always praise him for worthy effort, thus doing all within your power to make his lot easier. If he is sure of your unfailing faith in his ability to learn, he will never cease trying, whereas if he sees you have no confidence in his efforts he will soon cease to care and then there will be no hope for his ever becoming more intelligent. 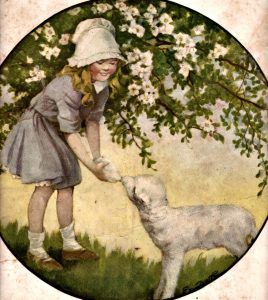 Miss Gladys Harpold of Assumption, Illinois, won first prize for her story on the subject, “My Most Profitable and Enjoyable Vacation.” She was about fifteen years old when she wrote her story and married the following year. Gladys became the mother five children and died at the age of 90 while residing in California. 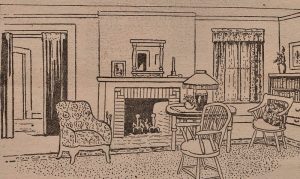