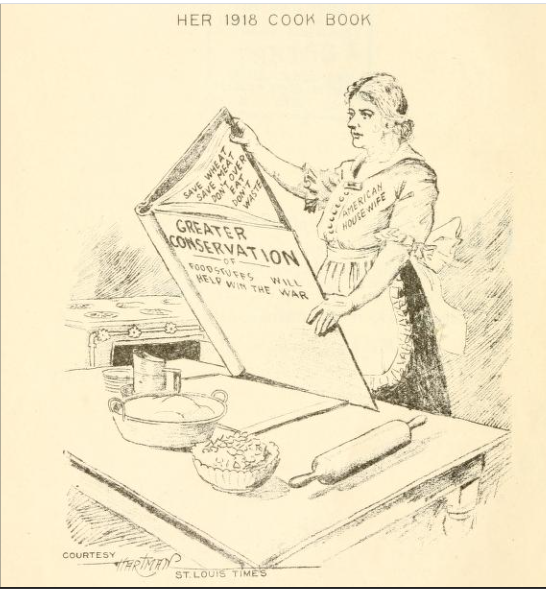 Go back to the simple life, be contented with simple food, simple pleasures, simple clothes. Work hard, pray hard, play hard. Work, eat, recreate, and sleep. Do it all courageously.

~Herbert Hoover, US Food Administration in World War I

I’m one of those people who read cookbooks from cover to cover, especially old ones, just for fun. You may even find the occasional cookbook in my stack on books on my nightstand. Lately I’ve been reading cookbooks from the early 1900s and it’s led me down a deep rabbit hole. While I’ve read a number of World War II era cookbooks and am familiar with food rationing, for some reason I’d missed the history surrounding World War I, where shortages and food scarcities were also a concern.

While rationing wasn’t done to the level it was in World War II, civilians (and especially housewives) were encouraged to use alternatives for wheat, sugar, meat, and fat to help with the war effort. What’s old is new again, and here we are 100 years later and I’m seeing themes that feel very relevant to life right now.

When I look through my stash of cookbooks from the 1910s, I’ve noticed some things:

We have been remarkably blessed in recent years in the US. Two years ago I couldn’t have imagined empty shelves in the grocery stores. But then 2020 happened. I was a conquering hero because I found a couple of frozen chickens in the meat department and felt a touch of pride in my ample supply of toilet paper. But now we’ve all seen purchase limits and aren’t completely surprised when something is out of stock. And empty grocery shelves are actually a thing, not an image of an historic, far away place.

What if the sporadic shortages in the food supply continue or even expand? None of us want to consider the worst scenario, but it might be worthwhile to think and prepare for difficult circumstances. l regularly hear rumblings that we haven’t begun to experience the worst of inflation and supply chain disruptions. Maybe the economy will bounce back quickly. Or maybe it won’t. Or maybe something else will happen. Famines and plagues aren’t just the stuff of fiction. If there’s one thing we’ve learned, it’s that anything can happen overnight. People throughout history have had to turn on a dime and be creative.

So far, reading cookbooks from the World War I era has given me a glimpse into:

Some of the recipes I’ve read absolutely deserve a place in history and by that I mean they should be kept firmly there in the depths of history. However, several recipes intrigue me and may have some merit for modern tastes. At least I think they’ll be worth trying! Since this topic intrigues me (and is so very relevant these days!) in future posts I’ll be sharing some of the recipes, perspectives, and observations I’ve discovered.