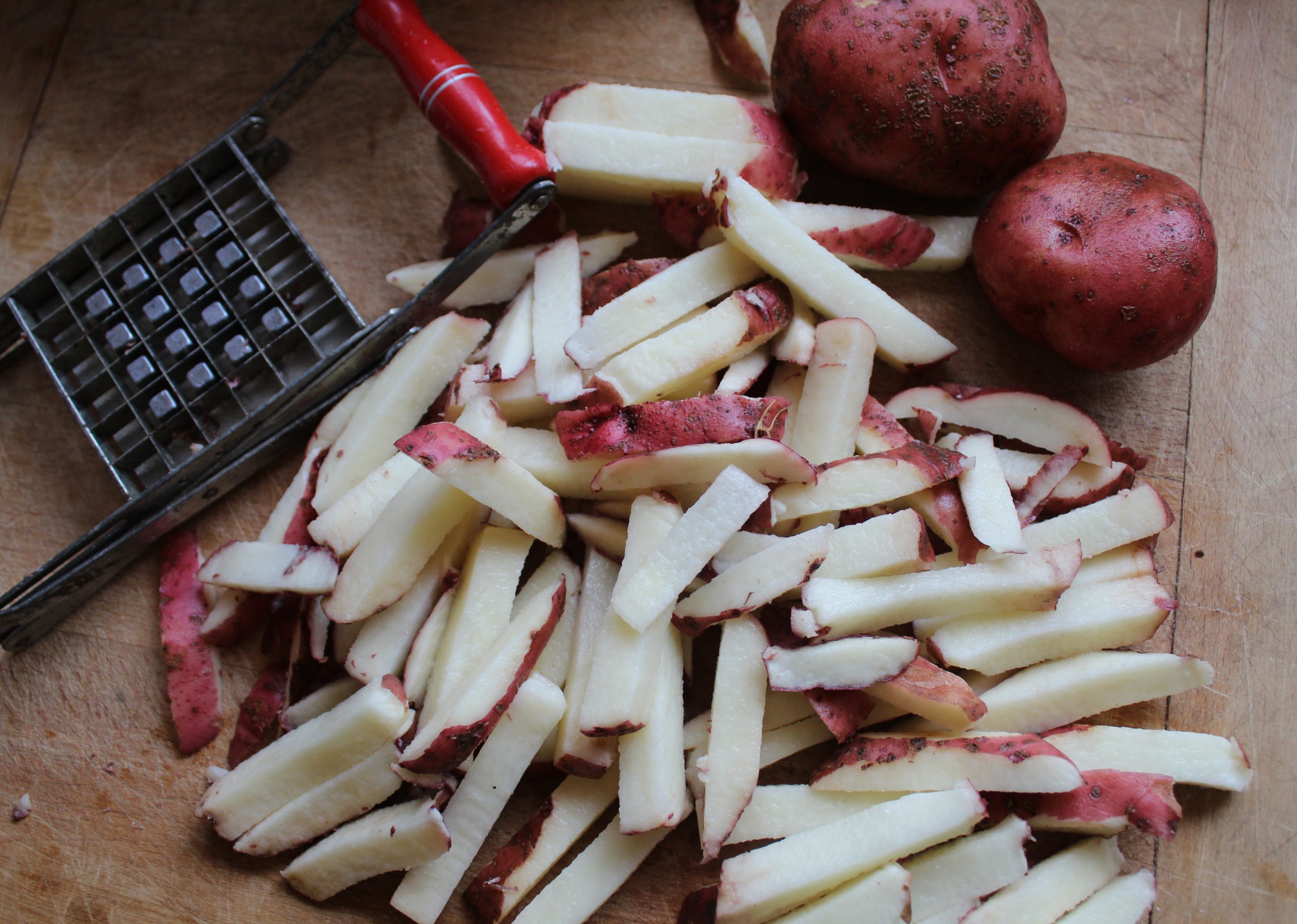 We had a bumper crop of potatoes last fall. In spite of my conscientious efforts to work them into meals all winter long, here we are on the verge of spring with two full bushels still to go. It seems like their eyes are sprouting daily. We’ve generously disposed of some of them onto unsuspecting neighbors, yet here we are.

We’ve gotten more than our money’s worth from our $6 worth of seed potatoes, but my frugal little heart can’t let the rest of them go to waste, especially since store-bought potatoes are lousy quality in the summer. I have a few strategies for preserving potatoes but this year I’m using them all. So here are my favorite ways to preserve the end of the potato harvest before the next crop is ready.

We don’t get wildly excited about canned potatoes. They’re a lot different from fresh potatoes, and taste as if they’ve been, well, sitting in a jar of water. Unlike the pictures in the canning books, I leave the potato skins on. I could tell you that it adds flavor and vitamins, and it may, but the honest reason is that I can’t be bothered with tedious work like peeling. But plain canned potatoes are adequate and have their place. In my opinion, they taste best on a camping trip, fried in bacon fat in a cast iron skillet.

My favorite way to can them is to include them in a batch of beef stew. It’s a great way to use all the winter vegetables–potatoes, carrots, celery, and onions with beef or venison. One batch of beef stew gives me 7-8 quarts of a shelf-stable convenience meal so it’s my number one use for end-of-the-season potatoes. The recipe I use comes from this book.

Dehydrating potatoes is a multiple step process, not difficult, but a little time-consuming. I dehydrate potatoes in two forms–hash browns and slices–but both follow the same process. The main trick is to keep them in water to prevent them from browning. Immediately after shredding or slicing, I put them in a bowl of water. I blanch them in boiling water for a few minutes, then stop the cooking process by scooping them out of the hot water and back into cool water. After I’ve drained them, I lay them out on trays to dehydrate.

To reconstitute, I cover the hash browns with boiling water and let them sit for a few minutes to absorb the water. For slices, I’ve found that the dish will bake more quickly if I boil them for about minutes before adding them to a white sauce for scalloped potatoes.

I’ve tried freezing mashed potatoes, and while it can be done, it’s not our potato dish of choice, so I no longer bother to do this.

Our very favorite way to eat out-of-season potatoes is as french fries. It makes a perfect quick side dish for summer hot dog/hamburger meals. Similar to dehydrating, I cut the potatoes up and let sit in a bowl of cold water. Then I blanch them for 4 minutes, let them cool down in another bowl of cool water, then drain and freeze them on baking trays before bagging them. Since they’re partially cooked, they bake quickly and get nicely crispy with less oil. I actually prefer them to freshly made, unblanched fries!

So those are my go-to potato strategies. If you have any more suggestions, please share them!