Once upon a time, I was a teacher in a most unusual setting. I taught in a little one room schoolhouse without electricity or running water. (Nope, I’m not 120 years old, either.) While not a member of the community, I was the schoolteacher in an Old Order Amish settlement.

The settlement was a new one and very small at the time. It was made up of young, growing families with no one free to take over the school responsibilities. So in an unprecedented move, they looked outside their community, asked around, and offered the job to me, an English (i.e., non-Amish) 20-something. Who could turn down an opportunity like that? Well, apparently, a lot of people could. Not everyone would enjoy spending 8 hours a day in a different culture, teaching children in 8 different grades, and all without modern technology or conveniences. But I couldn’t pass up the chance and that was lucky for me.

People have asked me what it was like. Think Laura Ingalls Wilder and the Little House books, except that for me, it was an entirely different culture, including the language. It was an incredible experience and the stories could probably fill a book.

One of the highlights of the school year was the annual Christmas program. Around Thanksgiving I chose and passed out the recitation parts to all my scholars. The older children were given long Christmas poems, with an impressive number of stanzas to memorize. For the youngest scholars, I chose shorter pieces from my book of Amish school poems and “pieces.” Besides their own pieces, a few would share a poem, each taking a stanza or two. I also picked out several Christmas carols for us to practice. The children would memorize the poems on their own at home and as Christmas drew closer, we practiced our songs and took turns reciting for a few minutes before the end of every school day.

The Christmas program also included gift-giving. We drew names in early December, with each child drawing the name of a classmate or that one slip that simply said, “Teacher.” Oh, the pressure on the child who drew Teacher’s name, and how envied the child whose name I drew! Besides a special gift for the student whose name I drew, I also bought a small gift for each of my students. 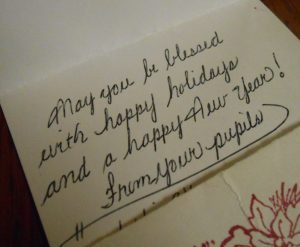 Christmas break in Amish circles is typically short, usually only taking Christmas Day off. So the program was scheduled for Christmas Eve. Children are children the world over and Christmas brings out the squirreliness in all of them, Amish included. We did our usual morning routine and I followed it with a few simpler lessons, in hopes of giving the restlessness an outlet. After a quick lunch, it was time to get ready for our company. We had to clean the schoolhouse, make sure all the Christmas artwork was hung, and do one last practice of the program….