Mr. Bell, the uncle, and some neighbors started immediately for Fort Hays, where some soldiers were barricaded, for help, not knowing what direction the Indians had gone. The men knew too that they were not able to cope with the Indians, and recapture the children should they find them alive.

All possible haste was made in reaching the fort, and soldiers were soon racing over the prairie in every direction, looking for any sign that might tell them Indians had been near.

In the meantime, the Indians had ridden almost night and day, the children knew not in what direction nor how far. Somehow the Indians got wind that the soldiers were after them and dropped the two wretched little girls out on that wide sea of prairie, with not a tree or shrub in sight, and no sign of habitation near!

The Indians made the children understand by signs and motions that they must ride “fast” and “far” and the children, already tired out with the three days and nights ride, could not stand to ride so fast and far as the Indians were going, as they would have to leave them on the prairie! 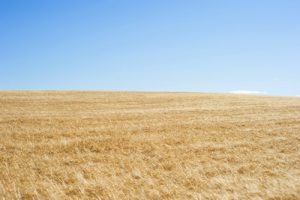 Poor, forlorn, forsaken, little tots! This last fate was even worse than the first, for the Indians had been as kind to them as they well could be. They had made as soft seats as they could on the ponies’ backs, and tied the children on that they might not fall; they had given them enough to eat to stay their hunger, and had given them tin cups to drink their coffee out of, while the braves drank their coffee out of tin cans!

The Indians certainly had not taken the children with any intention of massacre, but the grief-stricken parents did not know this, did not have even this fact to comfort them.

Now came the saddest, loneliest time there wretched little girls had, or ever would experience. It being about three o’clock in the afternoon as the children supposed, when the Indians dropped them, the little tots started wandering over the prairie, fondly hoping to reach home before night!

The sun went down, the stars peeped out and hungry, tired and oh, so scared, the children lay down on the soft buffalo grass, and with no covering but the sky, no vigil but the stars, soon forgot their wretchedness in slumber, never waking the whole night long!

When the lost children awoke next morning the sun was shining brightly. They arose quickly and started on again, roaming, roaming, they knew not, cared not, where, only that they might get home!

All day long they tramped, without food, without water, the older one trying to cheer the younger with the promise that they would “soon be home, now” when she seemed likely to give up, and wanted to stop.

Near night on the second day of their aimless tramp, they came to a little stream, now dry, save for a little water standing in puddles in the tracks made my the buffalo as they had come down to drink. Here the children laid flat on their stomachs, and drank their fill of the dirty water, but they said long afterwards it seemed the best water they had ever drank!

To be continued on December 10th.